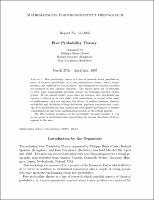 Free probability theory is a line of research which parallels aspects of classical probability, in a non-commutative context where tensor products are replaced by free products, and independent random variables are replaced by free random variables. The theory grew out of attempts to solve some longstanding problems about von Neumann algebras of free groups. In the almost twenty years since its creation, free probability has become a subject in its own right, with connections to several other parts of mathematics: operator algebras, the theory of random matrices, classical probability and the theory of large deviations, algebraic combinatorics, topology. Free probability also has connections with applied mathematics (wireless communication) and some mathematical models in theoretical physics. The Oberwolfach workshop on free probability brought together a very strong group of mathematicians representing the current directions of development in the area.