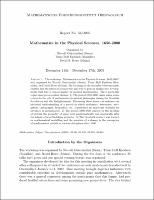 The workshop “Mathematics in the Physical Sciences, 1650-2000” was organised by Niccolò Guicciardini (Siena), Tinne Hoff Kjeldsen (Roskilde), and David Rowe (Mainz). By focusing on the interplay between mathematics and the physical sciences the aim was to gain an insight into developments that had a crucial impact on modern mathematics. Three particular topics emerged as central themes: 1) The period 1650-1800 raises many issues related to the role of mathematics in natural philosophy during the Scientific Revolution and the Enlightenment. Discussing these issues can enhance our historical understanding of a period in which mechanics, astronomy, navigation, cartography, hydraulics, etc., constituted an important stimulus for advances in mathematics. 2) The period 1800-1920 centred on the problem of probing the geometry of space both mathematically and empirically after the advent of non-Euclidean geometry. 3) The twentieth century was focused on mathematical modelling and the question of a change in the conception of mathematical models in various disciplines after 1900.