Mini-Workshop: On the Reception of Isaac Newton in Europe 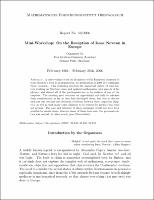 A three-volume book on all aspects of the European reception of Isaac Newton’s work is in preparation, for publication in 2008 by Continuum Press (London). This workshop involved the important subset of contributors working on Newton’s pure and applied mathematics and aspects of his physics, and almost all of the participants are to be authors of one of the chapters. The meeting gave everyone an opportunity not only to rehearse their contributions as far as they had developed them, but also to discuss and sort out overlaps and divisions of labour between their respective chapters, as well as with many other chapters to be written by authors who were not present. The ease and intensity of these exchanges would not have been possible by emails alone, however many of them were sent; the personal contact was crucial. In other words, pure Oberwolfach.